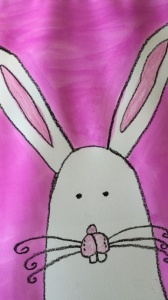 I know I am a little late in the game with Easter this year…it feels like the school year is just flying by.  This is a cute lesson I found on artventurous blog http://artventurous.blogspot.com/2014/04/easter-bunny.html?showComment=1396478653392#c8458852638914827174.  I ended up cutting some templates for the students to use to trace for the egg shape body so that we would start out proportionate 🙂  Then we added the rest of the features step by step with pencil and erasers.  I thought I would share with you so you can do over Easter break.  Have a happy and blessed Easter!

I started by talking about the bunny and its shapes.  We discussed how the body kind of looks like half and egg etc.  Then I let them use a template I cut out to trace the large egg shaped body at the bottom of the paper.  Next we moved onto the large floppy ears extending them to the sides of the paper one oval line at a time.  Then adding the same oval shapes inside the ears.  Then we moved to the center of the egg shape and drew two oval circles that connected and one smaller circle on top of those two.  Then we worked on those fun teeth making two rectangles that hang off the nose.  We added small black dots in between nose and ears for eyes and then moved onto whiskers.  We only had room for three so we first drew dots inside the nose to give us a starting point for the whiskers.  Then we drew the curvy lines with a swirl at the end.  After we did this in pencil we followed it with a black oil pastel and traced over trying to cover up our pencil marks but also creating a good oil pastel barrier for the watercolor.  Then we filled in the nose and ears, and if you wanted a different color body (other than white) you colored that too.  Then we chose our background color and painted the entire background and that is it!

Visit My Other Sites

This is not your typical art teacher blog. This is a humor blog.

LaSelvaBeachART is sharing ideas and inspiration from the beach :)